Giant Screen broadcasts for The City of the Unexpected.

What a challenge for us at Bubble, 6 giant screens around the city, a moving procession vision mixed on the move LIVE with three cameras. Two jib cranes, another 6 static cameras, three OB trucks, three dozen crew and who knows how many miles of fibre, HD-Sdi cable, oh, and throw in a couple of Satellite links for good measure.

staged by The National Theatre of Wales was of epic proportions. The challenges for us lay in relaying coverage of the street procession back to the main outside broadcast unit. From here the images were relayed back to giant screens around the castle and across Cardiff city centre. The remote screens were all receiving the images from our server, fed by hard wired internet connections. That bit was simple. The biggest challenge was going to be the moving procession. For this we came up with a fairly simple solution. 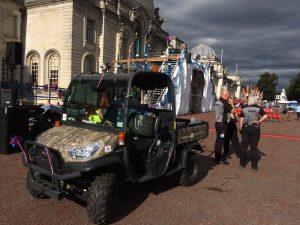 From the back of our buggy we were able to hard-wire one camera, a further two then had short distance radio camera links, allowing them a solid 600m range in normal conditions. Consequently with a crowd estimated by Police that day in excess of 35,000 outside the castle alone, the RF interference was huge. The normal range of our radio links cameras was reduced on the day  to around 30m because of this interfereance. The next problem was with the vision mixer on-board the buggy. 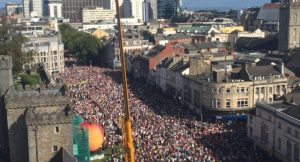 We had to transmit those images back up to the castle. The only cost effective way was going to be bonded 4g. Enter problem number 2… With the huge crowds and just about everyone having a phonein their pocket, was it going to work? Due to some clever bits and bobs of kit, our IP and a lot of research we found a work-around. Yes the picture blipped a few times but these were momentary flash frames, no worse than any other major event. We did see off the competition though, as we were aware that some of the major broadcasters were having problem with their bonded LIVE systems.

The overall results were great and a stage of epic proportions… can it be repeated?

Depends on the project that you have in mind. Give us a call…